"Sending the Doughboys 'Over There'" 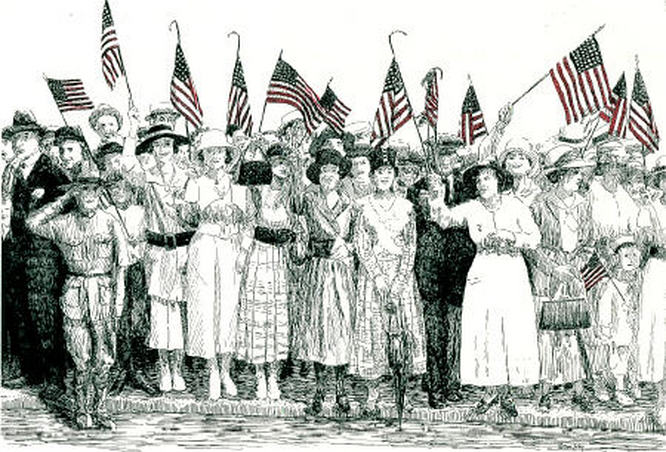 World War I, also known as the First World War, the Great War and the War To End All Wars, from 1914 to 1918. Over 40 million casualties resulted, including approximately 20 million military and civilian deaths. The conflict had a decisive impact on the history of the 20th century.

The United States originally pursued a policy of isolationism, avoiding conflict while trying to broker a peace.  When a German U-boat sank the British liner Lusitania in 1915, with 128 Americans aboard, the U.S. President Woodrow Wilson vowed that "America was too proud to fight" and demanded an end to attacks on passenger ships.  A decrypted the German diplomatic code, and discovered a proposal from Berlin (the famed Zimmermann Telegram) to Mexico to join the war as Germany's ally against the United States.  U.S. Congress declared on 6 April 1917.

The First World War began as a clash of 20th century technology and 19th century tactics, with inevitably large casualties. By the end of 1917, however, the major armies, now numbering millions of men, had modernised and were making use of telephone, wireless communication, armoured cars, tanks and aircraft. 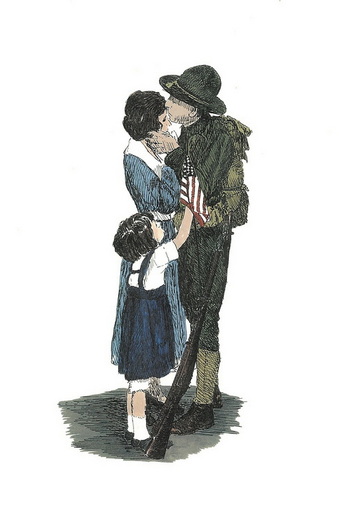 Inspired from a photograph of the artist's grandfather saying goodbye to his soon to be bride.  Artistic license allowed for the addition of the daughter.