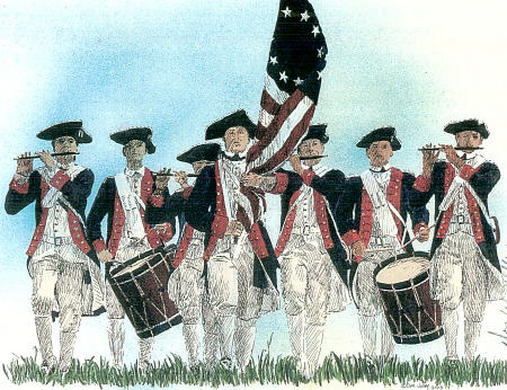 Calls of “THE BRITISH ARE COMING!” broke the silence on the night of April 19th, 1775.  Along the dusty road from Boston to Concord, church bells rang out in alarm in small towns up and down the road.  The British had sent out the Regulars to seize powder and shot that had been stored in Concord.

On that road to Concord lay the small parsonage of Lexington with its 750 citizens.  Their church bell had summoned its Minutemen, led by the husky Captain John Parker.  These men believed that the British had up to 1500 troops coming their way on the road from Boston.

Warned that British soldiers were fifteen minutes from the town their 16-year old drummer sounded To Arms.  Captain Parker placed his Minutemen on the Green, away from the Concord Road.  They ranged from grandfathers to teenagers in this close-knit community.  Many were related and lived there for over three generations.  Fathers stood with their sons.   All seventy-seven watched the Concord Road.

First to appear was a mounted British officer.  Then three more, followed by six companies of red-coated light infantry, the most aggressive soldiers in the army.  700 grenadiers, the biggest (and supposedly most fearsome) soldiers followed them.

The British light infantry entered the Green, deployed into a line of action and moved straight for the militiaman.

British officers shouted at the assembled colonists, “DISPERSE, YE REBELS!”  “SURRENDER!” and “LAY DOWN YOUR ARMS!” 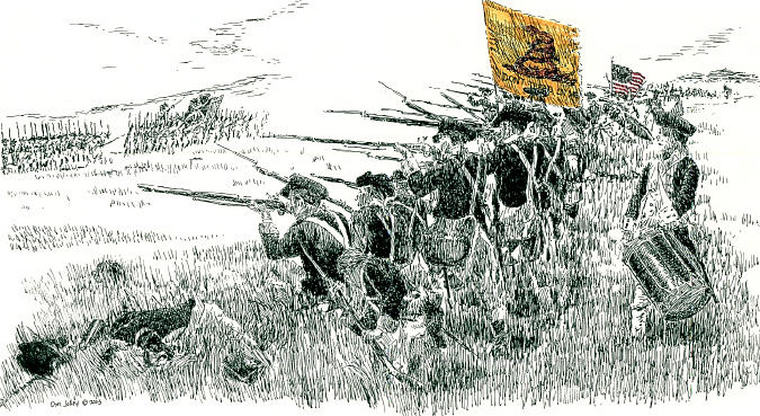 When Parliament passed the Stamp Act in 1765, South Carolina's Christopher Gadsden  helped rally opposition to that oppressive law. He argued that taxation without representation violated the most basic laws of the English constitution and the natural rights of citizens.  Gadsden gave us a flag, one that flew prominently during the American Revolution, under which many men fought and died. Gadsden's was the blazing yellow banner that sports the ominous coiled snake and revolutionary warning, Don't Tread on Me.

The coiled snake was an effective symbol, the kind of message the revolutionaries wanted to send. The rattlesnake had special significance. Like liberty, the rattler was found only in America.  That wily serpent was usually just a harmless, humble creature. But aroused, angered, and prodded, first it warned with violent rattle then it struck with a deadly bite. Gadsden emphasized this by printing the legend "Don't Tread On Me" on his flag.
The words swept the nation. It became the banner of minutemen militias. The Culpeper Minutemen chose the coiled snake ready to strike and the words from Gadsden's flag, but then raised another defiant fist at England by adding the words: "Liberty or Death."

At sea, the first flag of the Continental Navy carried Gadsden's warning, this time with a sea snake slithering across the 13 red-and-white stripes. 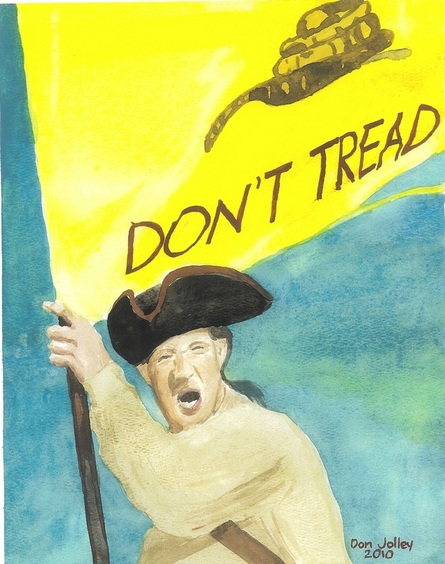